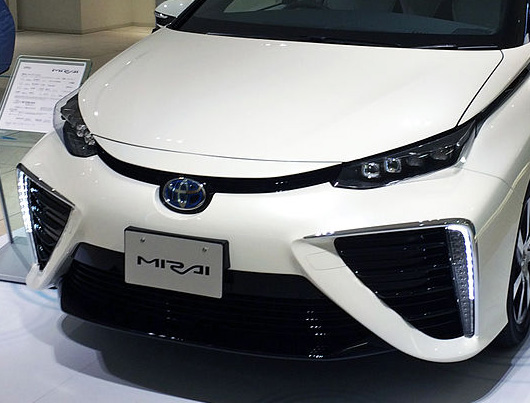 Toyota Mirai is Toyota’s car of the future and the main fuel it uses is hydrogen which means that there are basically no emissions. Before we go into any details we have to say that among electric or hybrid cars that came out in the last few years, this is certainly the most impressive solution. Toyota really exceeded our expectations and they proved us that it is possible to make a smart car which doesn’t pollute our fragile planet.

When it comes to performance, 155HP electric motor will be able to push Mirai from 0 to 60 mph in 9 seconds, which is impressive for this kind of car.

Its range is 300 miles and it will only take you about 5 minutes to refill the hydrogen tank. It also handles fairly well since all the weight is concencrated on the floor of the car.

Some skeptics might argue that there are not enough filling stations around for this project to be viable, and that it is hard to transport hydrogen, and that might be partially true, but there is a solution for this problem.

Toyota’s plan is to implement stations which would basically make the hydrogen on the spot, which in other words means that there would be no transport and that it would be easy to develop such stations.

You are probably asking yourself when this car will come out, and the answer to that question is in 2015, although, it is going to hit Japanese market first followed by European and American. Even though it might not be as cheap as some of the gasoline cars, price of 62000 dollars still seems affordable. Instead of using internal combustion engine to produce electricity this cars uses fuel cell. When it comes to maintenance, it is minimal and you have to only pay attention to things like air filter and cooling system.

One thing grabs attention instantly is its design which is much better than let’s say Prius’ that looks terrible, but it still gives that impression that it wasn’t high on their list, which is kind of understandable. That is basically the only drawback of this car, but don’t get us wrong, it still looks decent and it captures the whole point of Mirai.

Hydrogen is fuel with a lot of potential, it can be produced from renewable energy sources like solar or wind. It is also easy to store and it has additional uses besides car industry. It seems like Toyota has recognized potential of this fuel and they are pretty much the main player in this game.