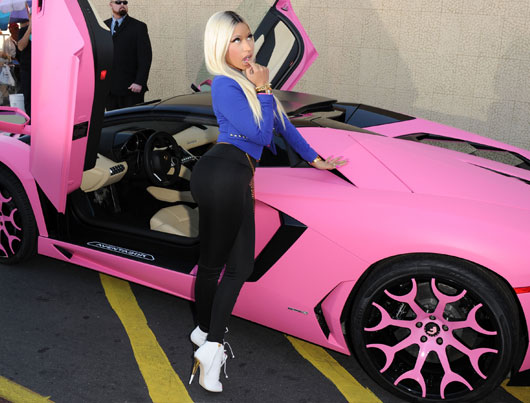 In the tough world of the rich and famous sometimes it can be hard to stand out. Everybody can get a Ferrari, Porsche, or Bugatti, but these wealthy people managed to get some unique rides.

As we all know Lamborghini cars are very popular among celebrities, and of course people love them because of their aggressive design and outrageous power.

One of those people is Nicki Minaj who decides to customize her Aventador with Forgiato rims and insane paintjob.

As you can see from the photo color of her choice was pink, which is pretty much a sacrilege to all petrolheads.

However, it is her design, and this car represents her. Performance wise this car, as you already might know, is insanely fast.

It will reach 62 mph in less than three seconds, and it’s maximum speed is just under 220mph. All this luxury, performance and mods do not comes cheap, her Lamborghini Aventador set her back 400 thousand dollars.

Here is one more really fast car that never made it to production lines, but that didn’t stop one of the best rappers in the world from getting one.

Only couple of these cars were made and even though they have all the functionalities of any production car, they never made it as serial models.

At the time this car was made (in 2004), it had insanely good performance numbers, mainly due to its lightweight body and engine which was pushed by four turbos. It was able to hit 62 miles per hour in under 3 seconds while its maximum speed was just under 250 mph. This is definitely an impressive and scarce car, and when it comes to its value, it is priceless.

Some of you might have never heard about this guy, but ask anybody that’s active on social networks and they’ll tell you everything about him.

This poker player lives an extravagant lifestyle and he drives cars to match it. One of his most impressive cars is the Mercedes Benz G63 6×6. This is one amazing SUV, it has six wheels and as you might conclude from the name it’s a six wheel drive.

It is an ultimate off road vehicle and it can drive through meter of water. It is powered by 5.5 liter V8 engine which develops well over 500HP. Considering this car’s capabilities, it can be a lot of fun, of course if you can afford the price of $555K.

Many of you probably didn’t hear about this guy, but he is a former movie director who turned to professional investing, and continued the legacy of his father.

In his world money is abundant and that reflects on his cars. First of his two cars on our list is Ferrari P 4/5 which is one of a kind. It is based on Enzo, while the exterior is totally overhauled by the Pininfarina.

It is powered by 6 liter engine which develops 660 HP. This monster of an engine is enough to push this car to 62 mph in 3 seconds and it gives it the maximum speed of over 230 mph. As you might have guessed, this one of a kind car does not come cheap, it is valued at 4 million dollars.

Here is one more insanely good looking and outrageously priced Glickenhaus’ car. It is made as a real racer which can be turned into the street legal car.

This car is all about performance, it is lightweight and it is mainly built from carbon fiber which also ensured durability. When it comes to exterior design, this car truly looks amazing.

Naked carbon fiber shows its true intentions, while the aggressive front end doesn’t look like anything we’ve seen before. To prove its track capabilities, this car will race on Nurburgring on a 24 hour race. How successful this car will be only time will tell. Price of this car will range from two to three million, depending on the setup, whether it’s for road or track.

We all know C. J. Wilson for his impressive performance on baseball field, but apparently he is also a serious petrolhead, judging by his McLaren P1.

When it comes to performance, it is close to the top with its 900 HP, and just as its two main competitors (918 and LaFerrari), this car is also hybrid. Its electric motor gives it additional power, but it can be actually be used by itself to run for over 20 miles.

Just as all the other best cars of today, it will go to 62 mph in less than 3 seconds and reach astonishing 220 mph. One thing that actually separates this car from the rest is its amazing color. He paid well over a million dollars for his one of a kind McLaren P1.

Arnold is a rugged guy who pretty much accomplished everything he wanted in his life. That’s how he likes his vehicles, rugged, powerful and big.

One of those vehicles is Mercedes Benz Unimog and this vehicle is primarily intended for military. However, you can get your hands on one if you have enough money. This rugged off roader is powered by 6.4 liter turbo diesel engine which develops well over 300 HP.

It is not really a looker but it was never meant to be. Even though its HP numbers might not be impressive to some, they are mainly focused on power rather than speed, and that’s why Unimog generates insane amount of torque. This monster on wheels costs $270K.

8. Customized DeLorean created by Will. I. Am. and IAMAUTO

When Will.I.Am was a guest star at Top Gear, he talked about his intentions to start a car company in his home town, and how he wanted to make unique and custom cars.

Dreams like this can actually be realized when you have as much money as him, and even though his plans sounded pretty good, there was still a lot missing.

Judging by his final product, they lacked a real design, as well as engineering ideas, and his car was a bust to say the least. As you can see from the photos, it doesn’t really look that bad, but it still resembles the car it was heavily based on- the DeLorean. Even though West Coast Customs added their flavor to it, it still doesn’t justify the price of $700K.

This car really doesn’t resemble anything in the car industry and it was made to mark the birthday of Ferry Porsche. Even though it was never intended for serial production, some cars were supposed to be based on it.

It was built on components form Porsche production cars and believe it or not, this car is a capable off roader. It does lack one thing though, and that is exterior design. While engineering part was done to perfection, its exterior lacks a lot of refinement.

Unusual wheel arches give it the unfinished impression, while the color doesn’t fit the overall concept. However, as we mentioned earlier, this car was never meant for serial production, it was more like an exhibition.

Now we have all heard of Eric Clapton and he is also in that league of one of the kind cars. He is known as a true Ferrari enthusiast and he decided to take his love for Ferrari to the next level.

He did this by acquiring Ferrari SP 12 EC which built on 458 model. However, it doesn’t look anything like 458. It looks sleeker and more grown up, but it kind of lacks that aggressiveness found in the 458.

When it comes to performance it resembles the car it was based on. It will go from 0 to 62 in 3 seconds while its maximum speed exceeds 200 miles per hour. As you might’ve guessed this car is pricey, it costs just under 5 million dollars.

Not a lot of people heard about this car designer even though he created some of the most beautiful cars in the world.

He had his hands in everything from everyday cars like Alfa Romeo 159 to DeLorean and he even designed everyday things like cameras, watches, etc. Guy like this doesn’t want to drive a car everyone else can buy, that’s why he got a Ferrari GG50.

He wanted to mark his fifty years of design with something special and he created something unique based on another Ferrari model the 612 Scaglietti. There are some similarities on the interior as well as exterior, and even though it might not be the prettiest Ferrari out there it is definitely one of a kind.

Here is one more car whose price can’t really be defined. There is only one made and it is result of joint efforts of Jay leno and General Motors.

EcoJet is not typical car in any way, primarily because of its turbine engine which is intended for helis. It also runs on two fuel sources, one is the eco diesel and the other one is typical jet fuel which is used on startups and at the end of the ride to clean the residue of the diesel.

This car was technologically very advanced when it came out and it contains computers, led screens and advanced software. It is definitely one of the kind, and even though its price is unknown, it is probably highest on our list.