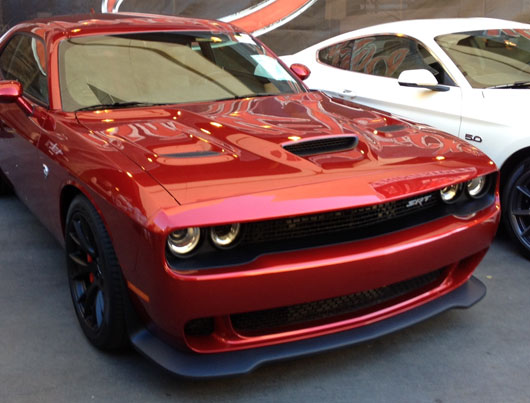 Most of us want to stand out for our own reasons, whether it’s love for cars, girls or whatever, but this can be really hard mainly due to our limited budget. Here are 11 cars which are fairly affordable that also look awesome.

First one on our list is not a car at all, it is actually a pick-up truck, and a mean one for that matter. There are not a lot of cars which are more manly and masculine than this truck.

If you have demanding job and you need something that’s durable, practical, and still looks awesome, this is the right solution for you.

Keep in mind that it can be pricey if you decide to get a new one, but used one with a decent payment plan is really affordable.

If you do some research, you can get one for around thirty grand. Put on some mean rims, and you’ll have a truck which really stands out. You’ll also get attention wherever you go.

Redesigned Ford Mustang is stunning to say the least. It is arguably the best looking muscle car out there and it is also very affordable.

If you go for the cheaper version, you might not get all the power available, but you’ll still get decent amount of power, and a ride which will stand out in the crowd.

Besides that, it is also very reliable car which is not a gas guzzler, excluding the V8. If you find the right deal you can get one with V6 engine for just over 20K. With some basic modifications, you can increase the power, and with some good looking rims, you can make a dream car out of it, which will also be one of the kind.

Here is one affordable American sedan which basically possesses everything you need, awesome design, modern technology and all the power you might need.

The only question is how much money can you actually spend on it. However, whatever you budget is, you’ll be able to find one that’s perfect for you.

New one is going to set you back around 30K, while you can get one of its strongest versions with low miles for about 20K. Dodge charger is definitely a car which sums up all the qualities of American car industry, and you get all that for affordable price. Put some money on aftermarket rims, and you’ll get a car like no other, of course with all the practicalities of a sedan.

Here is another muscle car which is within the reach of everybody. It is not really practical, but that is not really the point. This car is all about its roots.

It has the qualities of its predecessor which made it popular a while ago. If this car is the one for you, you will probably be able to get your hands on one.

Logically, if you are looking for something cheaper, aim for a car that’s few years old with low miles. If you have some extra money to spend, get the one with more powerful engine, you won’t regret it. Dodge Challenger is a true American muscle, and with its looks and engine roar, it will get you attention wherever you go.

Here is one more legend which stuck with us throughout the years. It is arguably one of the best looking cars, and besides that, it is also equipped with some powerful engines.

If you are looking for an awesome, aggressive and stunning car, look no further.

When it comes to money, you can get a new one for around 30K, but if you are looking for something more powerful, it would probably be smarter to settle for one with low miles that’s couple years old.

Just like most of other cars on our list Chevrolet Camaro can only look better with some aftermarket rims. If you have some extra money add some of your own flavor and make it look better than any other Camaro on the road.

Nissan 370Z is one more awesome Japanese car which gives you awesome performance and stunning looks on a budget. Even though a new one might cost you close to 30 thousand dollars, you can get used one with low mileage much cheaper.

This amazing car is powered by performance engine which develops well over 300HP. It weight distribution is on the top level and you’ll also get other performance components which are not available on some of the other cars on our list.

It is definitely not the prettiest car, but if you do some basic mods, and add some racing rims, you’ll transform it completely, which will make it look like no other car on the road. It’s not practical, but this car will give you everything else.

Here is one more amazing car which might cost a bit more than some of the previous cars on our list, but if you like a type of car like this, you probably won’t mind.

Subaru WRX STI is all about its roots, and the best times for Subaru, when they were well known for their success in rally world.

Even though there are some skeptics who try to discredit this car, it is a Subaru like no other, and its creators managed to bring that magic from the past back.

It might not be the fastest car out there, but it is nimble and it is all about driving pleasure. Amazing exterior design which scream motor sports make sure that it stands out in the crowd.

BMW cars stand out, especially in United States, mainly because they are expensive.

However, you don’t have to spend a lot of money on one, you can get one which isn’t all about luxury and which will still look good and perform well.

If you are looking for something like this BMW 2 Series is probably your best bet. You can get new one for around 30K, but even if you get used one with low mileage you won’t make a mistake.

Even though it might not be as mean as some of its bigger brothers, Series 2 still looks stunning and when paired with right engine, it will give you desired performance. It is also one of the cars that’s easy to modify.

Even though it might not be as masculine as some of the other cars on our list, best selling roadster of all time is not best selling for any reason.

It might not have the big engine or the stunning design as some of the other cars, but it will get you attention wherever you go. This car defines the driving pleasure, and it is a proof that lot of power is not all you need to enjoy yourself.

Its lightweight nimble body slides through the corners while the 2 liter engine gives you all the power you might need. Only people that know how to truly enjoy themselves will buy a car like this, so it is attention getter in its own way. It will be available in second half of 2015 for just over 20K.

Here is one more sport sedan which gives you all the practicalities of a big car with excitement of a sports car.

Mitsubishi Lancer is one of the most affordable cars on our list, and you can get new one for under 20K. It is a car which asks for some modifications.

You got all the necessary elements there to make and awesome car, all you need is some extra money and some will to make something unique and stunning.

Just like the Subaru, it also has a rich racing heritage and the elements from that era are still recognizable. It is yet another Japanese masterpiece which is within your reach, and if you want affordable good looking, practical car this might be best solution for you.

Here is one more car which is made purely for fun. It might not be the prettiest, but it still stands out, especially if you put on some racing rims.

Not everyone will get a car like this so just because of this fact alone you won’t be like everyone else.

When it comes to price, you can get new one for about 25 thousand dollars, and it is probably a good idea to get a new one since used ones suffered a lot.

Besides the fact that it is a good value for the money, this car is also a lot of fun and it is made to endure some serious drifting. Besides all this it is a nice clean canvas which can be modified to perfection.