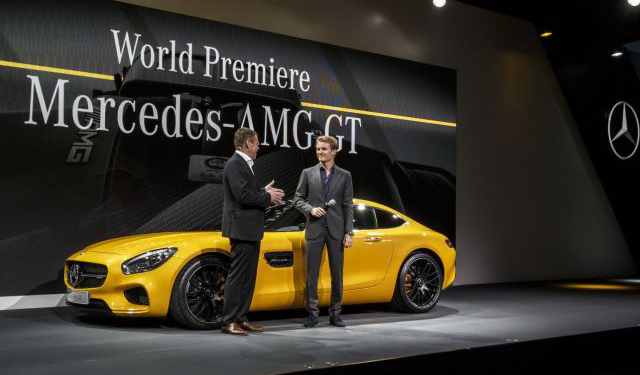 One more amazing car came from the Mercedes production lines and this time it is AMG GT, which looks amazing, we have to admit. Even though its predecessor the SLS wasn’t really a looker, this more refined version, with the same overall shape, looks stunning and it is pleasing to the eyes.

First thing that catches attention is the absence of symbolic doors which were the trademark of the SLS. This kind of approach might not be approved by many, but it also contributes to the amazing refined appearance of AMG GT.

Latest Mercedes will be powered by the 4 liter V8 which will develop from 460 in base to over 500 HP which will be found in the S version, making it competitive with some of the most popular models in the same class like Porsche 911 and Jaguar XF.

That amount of HP will give this car some envious performance numbers as both versions will be able to reach 100 kilometers an hour in 3.8 and 3.6 seconds in the GT-S version.

Even though it might not be raw as the SLS, this doesn’t necessarily have to be a bad thing because SLS was is some occasions hard to life with.

All the power will be transferred to the back wheels via 7 speed double clutch transmission which, knowing the Mercedes, should be without a flaw.

As we mentioned before, the more conventional look, might be the only drawback to this car, but that’s only is you ask hard core Mercedes purists. One more interesting option which will be available in the S version is custom exhaust which is adjustable so you can get that exact tone to get your heart racing.

As most of the modern cars AMG GT will offer numerous assist systems which will aid the driver when this fiery beast tries to run off road. However, you’ll be able to turn them all off to get the taste of some real excitement.

When it comes to price, there still isn’t a official number, but according to some speculations, it will be around 120 000 Euros, which is considerable less than its predecessor. All we have left now is its appearance on the Paris Motor Show where we’ll get more information regarding its price, availability, etc. Check out the slideshow below.