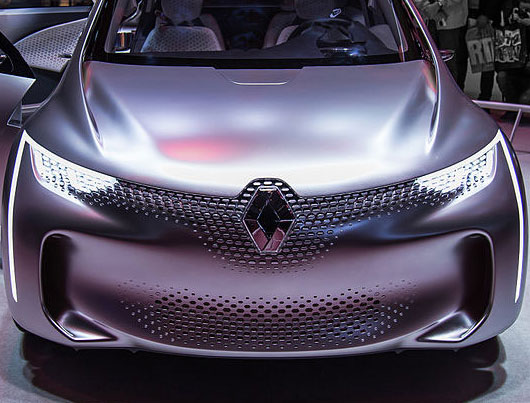 One of the cars that got into spotlight on this year’s Paris Motor Show was the Renault Eolab Concept. Main reason this car got a lot of attention is because it gets 235 miles per gallon.

Whether you are car enthusiast or you just use a car to get from point A to point B, you probably know that this kind of mpg is really impressive. Now how did they accomplish something like this? Well, they started by shedding weight followed by some amazing aerodynamics and lightweight components and systems.

As you can see at the first glance, this car is futuristic in every way. Its design, which has somewhat simple overall shape, took quite a while to come up with, but they managed to reduce air resistance drastically.

When it comes to powertrain, it has 1 liter engine, which is paired with another electric motor and they develop combined around 75 HP.

The secret of 235 miles per gallon lays in the fact that Eolab travels over, let’s say 60 miles, using 66 percent of the route the electric motor, 25 percent using its hybrid system and for only 9 percent of those 60 miles it uses its gasoline engine, thus making it extremely economical.

We’ve seen similar project which came from VW, it got lot of attention as well, but it didn’t make it as production car available to everybody. Really sad thing about his project is that Eolab will never get into serial production. According to main people in Renault, it is model which is used mainly for innovation and implementation of new technologies into their other future models.

Keep in mind that even though Eolab is an amazing car, it is still far away from its production version, and that might be the reason it’s not going to hit the market under this name. In other words if it’s really as amazing and innovative as it seems, we are probably going to see it in the next few years hidden under different Renault badge.

The car as it is in its current version has many drawbacks, however, those are mainly the result of the current state of the project, and they don’t make this car any less innovative. It certainly has a potential which we’ll see in the future cars for sure.