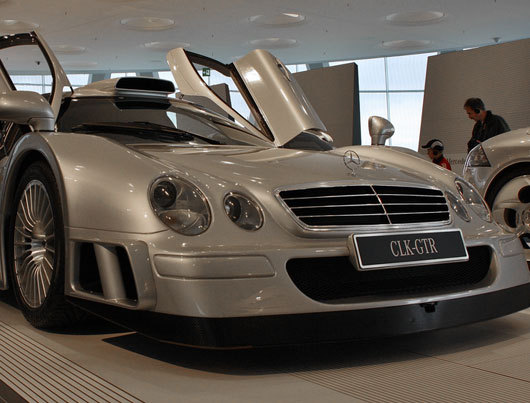 At the time of the golden era of GT Series, competition was very tough, to say the least. Besides some of the best cars ever made like Mclaren F1 and Ferrari F40 there wasn’t really much room for improvements. However, Mercedes engineers managed to do just that, and they created one of the most impressive Mercedes cars ever made, the outrageously fast Mercedes Benz CLK GTR.

They actually decided to create two versions of this car for racing, both of them were six liters, while the configuration was different. One of them was V8 while the other was V12. This car was actually so good that it dominated the series, making it somewhat uninteresting, at least to fans that didn’t really lean toward Mercedes.

On the other side if you had enough money, and you needed a lot, you could actually get yourself a car like this, for your own personal pleasure.

Mercedes decided to make this car in extra limited production of only 25 which would cost astonishing 1.6 million dollars.

Even though this was insane amount of money at the time, and even now, there were some well standing car enthusiasts that just couldn’t wait for it.

Road version of Mercedes Benz CLK GTR was equipped with a 6.9 liter V12 which was insanely fast, and it was able to reach 62 miles per hour in less than 4 seconds. Although price might be deterring factor for some, the ones that decided to buy it would get a real racing machine that was pretty much unsurpassed on the road. You would even get the full racing transmission which at some times would get noisier than the engine itself.

When it comes to practicality, there probably isn’t a car on the road which is more unpractical than this one. But, to be perfectly honest, that doesn’t matter one bit, since this car was made purely for performance rather than practicality. That’s even felt in the cockpit itself, since the driving position is the same as in every other racing car. Mercedes Benz CLK GTR offers a genuine racing experience which could only be matched by McLaren F1 at the time.

It is the legendary car that many dreamt about, even at old age, and it also might be one of the most impressive Mercedes cars ever made, even though it lacked some of the refinement of the modern cars. It was noisy, hard on your back and unpractical at all times, but it provided driving experience that most of the modern super cars simply can’t match. It is safe to say that it possesses that magic some of the older performance cars have, that most of modern ones can’t seem to replicate.