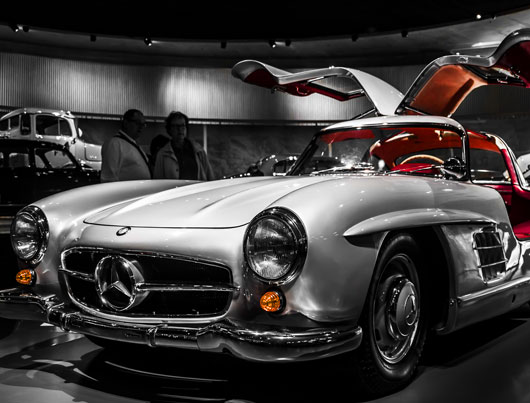 This German car company gave us some amazing cars throughout the years and Mercedes 300 SL Gullwing is certainly one of the. Its appealing classical design which perfectly describes the era of the automotive industry make it one of the most appealing German cars. Its smooth curves which follow the contours from the front to back really give it that uniform shape that most of the modern cars lack.

It is safe to say that it is arguably one of the most beautiful Mercedes cars ever made, and even though there are many other cars that might appeal to certain people more, this car just possesses that magic visually, needless to say when you get behind the wheel.

Mercedes Gullwing is a special car the moment it came out and it was a fastest production car for awhile mainly thanks to the newly developed direct injection which in combination with a straight six cylinder engine generated over 200 horse power.

Even though that might not sound as much today, at that time it was an achievement, and the fact that it had a very light body made it very fast as well as popular pretty much everywhere.

But, just like any other car, it does come with few drawbacks.

Gullwing doors which made this car iconic, also made it very unpractical and getting in and out of the car can be somewhat tricky, at least for some people.

As you might notice on the photo and on the video, doors pretty much reach just over half of the car which meant that there was a real obstacle to overcome when entering. On the other side, safety wise, this car didn’t really have good brakes, and it was able to exceed 160 miles per hour. That combination didn’t really go well in certain situations.

Newly introduced direct fuel injection also brought its own set of issues and there was a possibility that at low speeds fuel might mix with oil thus causing improper lubrication. Mercedes Gullwing is the car that brought success to Mercedes in American market since most of their previous models didn’t really satisfy the American taste for sportiness and power.

It is definitely a rare and unique cars which shows us how much effort was put in building cars like this in the past. It basically shows us how special it is compared to modern cars even though it is purely mechanical and not as refined.

However, we recently got a successor which is up to date when it comes to modern technologies and which shares some of the design features, but somehow it is not as appealing on the outside.