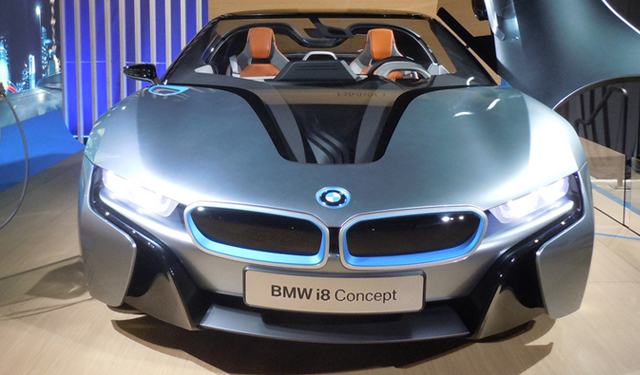 Among the many new car technologies that are supposed to make us safer, BMW presented amazing new headlights which are much more efficient than your traditional headlights or LED headlights. BMW presented the prototype of the laser headlights in 2011 and now they are finally implemented in one of the production models. This new technology will certainly make the roads safer.

New BMW plug in hybrid i8 is futuristic in every way. Besides the exterior which differs from any other car we’ve seen on the road, implementation of the new technologies puts it in the whole new league. The new i8 also plays the main role when it comes to headlights of the future- the laser headlights which are safer, more efficient and more attractive compared to standard LED headlights.

As we already mentioned, BMW implemented their new idea on the concept car of the future they presented on the Geneva Motor Show in 2011.

Before the year ended, they announced that these types of headlights will be implemented on some of the future models of this Bavarian manufacturer, but before all, it was going to be implemented on the new sport hybrid the i8.

Today, future is here, right in front of us, and the first sample of his new technology will be available to new proud owners of the i8.

When it comes to technology itself, BMW states that these new headlights will consume 30 percent less energy and light up the road in front much better compared to LED headlights.

If you use them on high beam, you’ll be able to see up to 600 yards in front of you, which is double the range of LED Headlights on high beam. Laser light differs from your conventional lights because its monochromatic meaning that light doesn’t produce the entire spectrum of colors.

As the result, we got headlights which are more precise, light up the road much better, and which are not the distraction to drivers coming from the opposite direction thanks to the special system that functions with the front camera controlling the light beam. Also BMW claims that laser technology emits significantly less heat compared to the LED’s.

To top it all off, laser diodes are ten times more compact than LED system. Compared to the standard headlights, light intensity is even more pronounced in laser headlights, about 10 times more. Safer driving at night is an obvious advantage of these headlights and they are certainly going to be implemented in more and more cars in the future. They’ll first appear on the i8, but this Bavarian car manufacturer plans to offer them as additional option on other models.