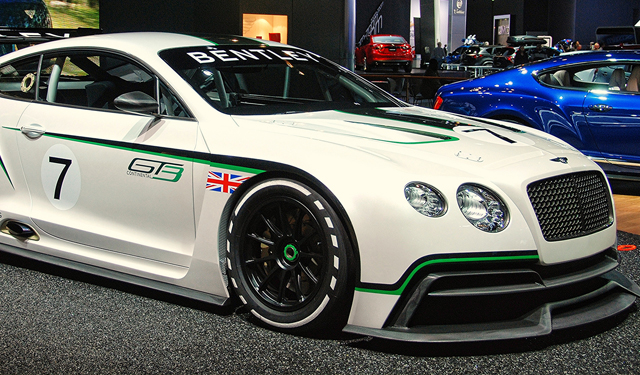 Endurance races are hell for teams, drivers and of course cars which have to be on top level when it comes to mechanics and all other components of a car. On a track like Nurburgring, which is one of the most difficult tracks, surprises are inevitable. As we all know there are many big names racing and Bentley is planning on entering Nurburgring in 2015 with their factory team competing with in this endurance race with their Continental GT3 racing car.

Nurburgring is not the only race they had in mind, and even though they didn’t really go into details, British confirmed that they will take part in Blancplain Endurance race next year. Even a few customer’s teams are going to race with the Bentley Continental GT3. On 27th of July in Belgium Bentley is going to break the ice with their official 24 hour race on the Circuit de Spa- Francorchamps.

Continental GT3 was first introduced on Blanspain in April this year, and it proved itself as more than capable.

When it comes to Britain and Bentley’s return after 84 years, Continental GT3 won at three hour race at Silverston which was more than obvious sign that this car should enter the 2015 24 hour race at Nurburgring.

Believe it or not Bentley stopped racing at endurance races 11 years ago when they took the first place on 24 hour Le Mans.

Even though Nurburgring might not be as popular, it is a good starting point and it will help them reestablish their position in 24 hour endurance races. When it comes to the car itself, Continental GT has been highly modified with spoilers and light weight materials to create one mean GT3 version.

Even though exterior doesn’t differ “much” from the serial model, interior is a different story. All of the luxury you would get in a Continental GT has been removed in order to save weight and improve the car’s performances. Six speed transmission transfer all the power to the back wheels from the 4 l V8 engine which develops 600 HP.

Competition is going to be fierce for sure, however, Bentley is prepared for the job and they certainly developed a car which can cope with the biggest names in racing. If the racing version of the car proves itself on the track like the Continental GT proved itself on the road, they really don’t have nothing to worry about. We wish them a lot of success on the track.