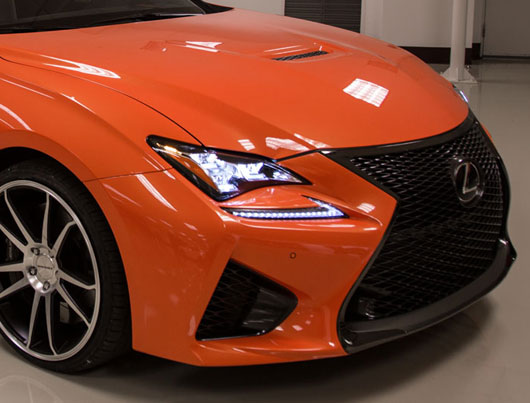 While everybody else is turning toward turbo chargers and superchargers Lexus is taking completely different approach. That’s why they decided to equip their new RC F model with a 5 liter atmospheric engine, which develops almost 480 horse power. Exterior design is decent and it has the modern elements which give it somewhat aggressive look, which by itself could push it over the top.

If we were judging only by exterior looks, it might even be better than most of its competitors but that’s not the case, this car still lacks a lot. When it comes to interior, they decided to go with a retro style which actually looks pretty good.

Problem in this whole story is that this car doesn’t really seem to match some of its competitors like BMW 4 series, when it comes to performance, as well as some other things.

We’re talking about its engine, which by the way develops less horse power, and it still seems feistier and more responsive.

There is one thing which engineers overlooked when making the new Lexus RC F and that’s the weight. It is around 200kg heavier than its main competitor which explains somewhat less impressive performance numbers.

One more thing that’s not really impressive on this car is the transmission which seems kind of slow at certain moments and it somewhat ruins the impression.

Even though there are different modes available, none of them seem to give us that desirable feistiness we expected from this car. There are two things on this car which are actually pretty good, and those are pretty responsive steering and amazing handling.

When it comes to zero to sixty time, new Lexus RC F will reach it in 4.7 seconds, while its maximum speed is nearly 170 mph. As we all know Lexus has built some amazing cars in the past and they can definitely do it, but when it comes to this car, it just lacks that something that could actually make it stand out among some very strong competition.

It is not a bad car, but it’s not anything special either, and that’s the main issue here. We would all like to see some of the magic that they achieved with LF A which would of course be available to everybody. If this is still something you’d like to get, be prepared to spend close to 80000 euros.