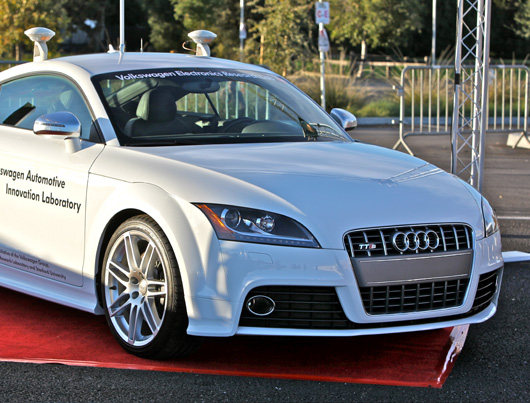 Technology in general has advanced drastically in the last decade and car industry is following that trend. We are seeing technology that was unimaginable in cars like HUD displays, lane assist, hybrid technology, etc. Now, one other technology is being prepared to hit the market, and it is bringing us autonomous driving.

Among car companies there are many competitors when it comes to this technology, but Audi might be the first company that’ll actually make first autonomous production car.

Cars that drive themselves sound great on the paper, but how will they perform in the real life? General opinion is split in half at the moment, but it’s definitely going to swing one way or another when we actually see the first self driving car.

On one side there are people who believe that self driving cars would be great for the long trips where you could relax or even take a nap perhaps, while the car does all the work, and those people are right. In the right surroundings autonomous cars could prove themselves as perfect.

However, how will they perform in the city, where constant attention is required? Will they be able to replace human beings and their reflexes, unsurpassed vision, etc. Only time will tell, but as we all probably witnessed from our own experiences, technology is far from perfect, malfunctions are regular occurrence even in simpler things like GPS devices.

If we take a look at this logically, autonomous driving will come with its own set of issues, which are then going to be resolved through time. It would actually be unrealistic to think that everything is going to function smooth in the beginning. However, will that transition period be followed by increased number of accidents? It is impossible to know answer to that question yet, but that could be potential reason for its failure.

If it shows even a tiny bit of unreliability, it is definitely going to show when it comes to sales. It would be crazy to think that people would buy something that could potentially hurt them in any way. But, all of best engineers employed by some of the biggest car companies in the world are working on this technology, and they are not going to rest before they make it as perfect as possible. Even if they make it perfect, another question comes up, would you put your life into computer’s hands, or would you keep things just as they are?